In the spring of 2012, our 2011-2012 AIF Fellow Margy Elliott conducted a SWOT (Strengths, Weaknesses, Opportunities, and Threats) analysis for Calcutta Kids. Margy carried out long interviews with representatives of all of our stakeholders including all of the staff; beneficiaries; donors; former interns; current interns and volunteers. The management team along with the board of trustees has carefully gone over this detailed document and is implementing changes so as to promote and further reinforce our strengths, fix the weaknesses, take advantage of the opportunities, and close the holes on the potential threats. Over the coming months, we will share ways in which we have used the SWOT analysis to strengthen and protect Calcutta Kids.

One of the discovered internal weaknesses was a lack of communication between the field staff and management. Many staff members commented on the need for regular communication and regular staff meetings. So we started such monthly meetings in July and we’ve been having such fun with them. 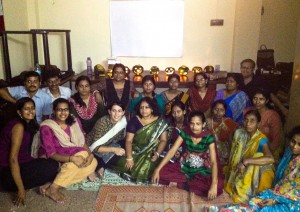 October 2012 Monthly Meeting. Staff sitting in front of “jack-o-lanterns” they made.

The meetings are events which both management and field-level staff look forward to. They are a time for recommitting to our cause and to celebrate the community that is Calcutta Kids. 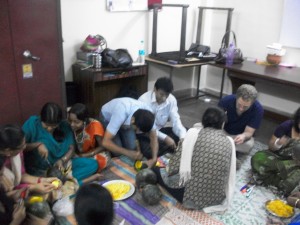 At the October monthly meeting, Noah and Evangeline were in charge of the ice-breaker. The day before the meeting, we told every member of the team to come in to work the following day with a cooking knife (they dubiously obliged) and Halloween and pumpkin carving was introduced. The staff broke up into groups of 2 and made beautiful ‘jack-o-lanterns’. The following day, Area-In-Charge, Barnali took all the pumpkins and cooked them into a delicious pumpkin stew and the whole staff ate it for lunch along with home-made luchis. –Noah Levinson 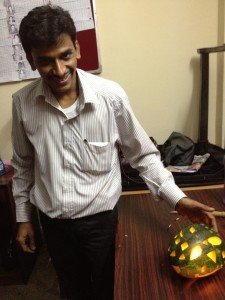 Chandan and his carved pumpkin 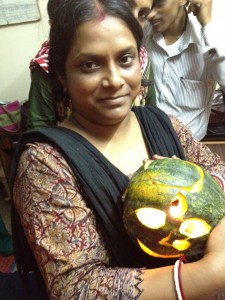 Sumana and her carved pumpkin

Posted on November 15, 2012 by Calcutta Kids| Leave a comment

In September, Calcutta Kids organized an immunization training program, which served as a refresher training for some of our team and a new experience for others.  The training was carried out by a colleague in the government sector, Dr. Swagata Mukherjee, the Assistant Medical Officer for the Howrah Municipal Corporation (HMC).  Despite his busy schedule, he volunteered his services to Calcutta Kids during his personal time.  During the training, participants learned about vaccine-preventable diseases and related vaccines, the proper vaccination schedule, and how to technically administer each type of vaccine.  The training comprised of two days of observation at the Municipal Health Center during immunization camps, and three days of theory, observation, and practice in the Calcutta Kids clinic. 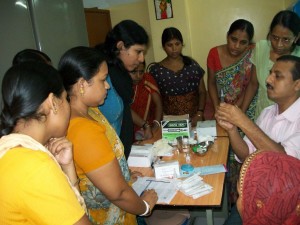 The training is one of many steps in the process towards implementing a community-based health care model at Calcutta Kids.  Until recently, our curative health, nutrition care, and immunization components have been held in our health center, Swastha Kendra, situated outside of Fakir Bagan.  During immunizations, vaccines were primarily administered by our nurse under the supervision of our doctor.  But this month we are merging the health center into our community center Ma o Shishu Shiksha Kendra, so immunizations are also transitioning to the new space in the heart of Fakir Bagan.  This is part of our effort to bring cost-effective healthcare solutions closer to the community.

The immunization camp will now be carried out in the community by the area in charges (senior community health workers) and the health assistant-counselors who are now qualified in immunizations as a result of the excellent training they received in September.  Where we once relied on one person to conduct immunizations every week (with the doctor as a back-up), we now have four trained staff members who are proficient in administering immunizations.  This will help ensure that immunizations are even more accessible for the families in Fakir Bagan, and provides Calcutta Kids the capacity to extend our immunization program to neighboring areas, thereby targeting more children in need of immunization. 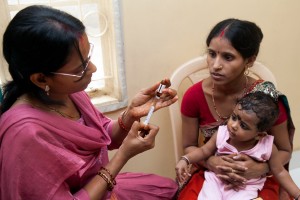 Laxmi administering vaccinations after the training

Around the world, routine immunizations have reduced and even eliminated many childhood illnesses that once killed and debilitated many children.  Although many vaccine preventable diseases (VPDs) have been controlled, children are still dying from diseases that could be prevented by providing the critical vaccinations during the first few years of life.  The World Health Organization estimated that, every year, 1.5 million children die from diseases that could have been prevented by routine vaccination.  That staggering total represents almost one-fifth of all the children who died worldwide before reaching their fifth birthday. (1)

The Indian National Immunization Schedule includes the following six VPDs: Tuberculosis, Diphtheria, Pertussis, Tetanus, Measles, and Polio. For a child to be considered fully immunized, he or she must have received one dose each of BCG and Measles and three doses of DPT and Polio in the first year of life. There is still much more work to be done in terms of immunization coverage in India: Nationally, less than half (43.5%) of children 12-23 months are fully immunized. West Bengal is faring better than the national average, with 64.3% of children 12-23 months fully immunized. (2) 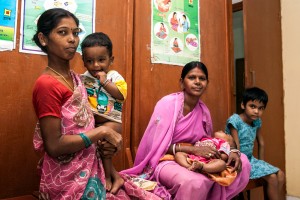 Waiting for immunizations at the Calcutta Kids clinic. Photography by Brett Cole, November 2012

Immunization in India must be sustained, not only to prevent VPDs, but also to reduce the incidence of measles and tetanus, and eradicate poliomyelitis. India, known as one of the greatest challenges for the global polio eradication campaign, has now been polio free for 18 months. (3) The last reported polio case was in Shahapur village in Howrah district, the same district where Calcutta Kids operates. Sustained immunization and coverage will ensure that polio does not make a comeback to this country.

Calcutta Kids is committed to help sustain immunization coverage in Fakir Bagan by ensuring that every young child in Fakir Bagan is fully immunized and therefore protected against vaccine-preventable childhood illnesses.–Danya Sarkar