The Art and Science of Diagnosis

A professor from Ohio State e-mailed me the article with the deceivingly understated subject line of all-lower case “fyi.” The Hindu write-up’s headline, though, didn’t mask the shocking contents: “Appalling condition of primary healthcare services” it read. (1) Short and potent, it described the lurid details of a study carried out across the health sector in India, rural and urban, private and public. The details showed a fundamental lack of ability by medical professionals to diagnose even the most common conditions (asthma and dysentery, for example) or ask the most basic questions (whether there was “pain radiation” for an unstable angina). The result was a low rate of diagnosis, whether it was in rural Madhya Pradesh or Delhi.

Overall, healthcare providers provided the correct treatment only 30.4% of the time. (2) Even worse, 41.7% of the time the clinics provided unnecessary or even harmful treatments for “patients” that the research study trained (“from the local community”, the article notes). Many providers, even in public clinics, were unqualified. Medical guidelines and treatment protocols were followed at low rates; providers only asked 33.7% of the recommendations. In Madhya Pradesh, doctors spent 3.6 minutes with patients, while Delhi medical professionals spent a marginally better but still terrible 5.4 minutes. For reference, the Medical Council of India recommends doctors spend at least 10 minutes with each patient. (3)

The article highlighted tough facts that Calcutta Kids has been tackling for years. Through our experiences with the health clinic, we’ve worked to combat the norm of primary health in India: brief, non-comprehensive visits and a disregard for protocols and checklists. We’ve uploaded to the resources section of our website our child health World Health Organization’s IMCI and IMPAC-based Child Health and Pregnancy and Maternal Health protocols and checklists which our doctors are trained and demanded to use. Our two health clinic physicians, Drs. Pal and Sen, work with our management staff to ensure that the protocols we have provided them matches their process for diagnosing patients. See the above-mentioned resources below:

It’s an important process that Calcutta Kids has to do to ensure our beneficiaries get not just quantity but truly quality care. It hasn’t been an easy process to bring in this cultural change into our clinic over the years, but it’s a necessary one. In addition, the creation of standardized protocols ensures a consistent level of care that our beneficiaries can expect, regardless of personnel changes. As Atul Gawande noted in his Harvard Medical School commencement, it’ll require an understanding of a team of healthcare providers- a “pit crew” that includes our health workers- not just the lone cowboy physician:

“The work is rooted in different values than the ones we’ve had. They include humility, an understanding that no matter who you are, how experienced or smart, you will fail. They include discipline, the belief that standardization, doing certain things the same way every time, can reduce your failures. And they include teamwork, the recognition that others can save you from failure, no matter who they are in the hierarchy.” (4)

Many rightly criticize the low rates of spending on health per GDP in India, ranking 171st out of 175 countries according to a WHO study. (5) But the situation is even grimmer: it is not enough to just increase spending, build more primary health centers or even to write diagnostic protocols at a national level. The groundwork of implementation at a doctor to patient level must be accomplished. At our health clinic, we work on this ground level to make sure that provision of the highest level of primary healthcare is a reality for the mothers and children of Fakir Bagan.–Pranav Reddy

Posted on January 9, 2013 by Calcutta Kids| Leave a comment

On December 5th, Calcutta Kids received a very special visitor, Brie Mahar, who shared her inspiring story with our beneficiaries and employees. Brie was born in Kolkata and was adopted and brought to the US when she was 2 months old. She realized her dream of returning to the country of her birth when she came to Kolkata in 2011 to adopt her second daughter. During this trip she witnessed the poverty first-hand and saw the tangible ways she could help meet the needs of orphaned children in India. She was inspired to develop an NGO to advocate for and help impoverished children in India. In 2011, she co-founded an organization called Illuminate India, along with Kristi Werre who has 3 adopted children from Kolkata. Illuminate India currently partners with two organizations in Kolkata: ISRC (Indian Society for Rehabilitation of Children) and Angel House, providing basic necessities, therapeutic and supportive resources for orphans, vulnerable children, and children with special needs.

Brie, Kristi and another colleague Nicole were in Kolkata in December to visit their projects at ISRC and Angel House, and during this time also wanted to meet with other NGOs working with children. Brie contacted Calcutta Kids and we organized for her to visit our programs and meet with two groups—beneficiary women and their children, and Calcutta Kids’ staff. Given Brie’s remarkable story, we specifically invited women in Fakir Bagan who had struggled with issues of having girl children and the negative response from their families and society. In this community, as all over India, issues such as sex selective abortion, female infanticide, and gender discrimination are very much prevalent and greatly affect the lives of mothers and female children. 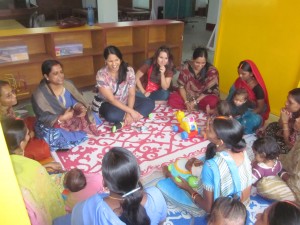 Brie shared with us her story of how she was relinquished at birth by her mother and taken to an orphanage. Back then, Brie was called Metali—she was a small baby, malnourished, and suffering from scabies and giardia when she was flown across the world to the US to unite with her adoptive family. She grew up in a loving family and in a typical American lifestyle,but she always wanted to know more about her country and culture of birth. She always wanted to return to India and adopt a girl child from the same place where she was adopted. After she married, she and her husband had a (biological) daughter whom they called Metali, and then adopted Tanaya in Kolkata four years later.

Despite her precarious start to life, Brie told our women that it was her mother’s love, guidance, and support that shaped her into the woman she is today. She said, a mother’s love is the most important part of a child’s life- without that love and support, a child will not thrive and reach their full potential. Our CK mothers told Brie that though they have affection for their girl children, it is difficult to raise them when their own families do not support them unless they have a boy child. Brie urged the mothers, despite these obstacles, to love and support their girl children just as much as their boy children–a girl child is just as valuable as a boy child and can have the same bright futures if their mothers believe in them. They do not need to go to America for better opportunities, but they can witness the change in their own country, in their own communities, if they understand that they have the strength within themselves to be that change. She said it was her mother’s love that now allows her to raise her own two beautiful daughters.

Our beneficiaries were deeply moved by Brie’s account, of where she had come from and where she is now- a wife, a mother, a nurse, and founder of her own NGO, helping vulnerable children. Our beneficiaries identified with Brie easily because of her background and the passion that she emanated. One mother said, “I can see that Brie is who she is because she had a mother who loved her so much, and she truly believes what a child learns from her mother will be passed on to the next generation. I feel motivated to pass these lessons of love on to my own children.”

Calcutta Kids’ health workers who also face many of the same issues were also encouraged by Brie’s story. They all agreed that what Brie has done in coming back to India, adopting a second girl child, and working with orphans is extraordinary. One of our health workers, Laxmi, who is from a very traditional Bihari family was especially inspired by Brie. She said, “I really liked to hear that even though you have a biological daughter that you also adopted a girl child and are giving her the same love and care. In our society it is seen as a huge burden to raise a daughter, let alone take a second one, but after hearing your story I realize how proud I am to have a daughter, and proud of myself for fighting to keep her in school all these years.” Brie and Nicole, thank you for visit and for inspiring the Calcutta Kids team.–Danya Sarkar

Welcome To Our New Trustees

Posted on January 3, 2013 by Calcutta Kids| Leave a comment

On the top of the agenda for Calcutta Kids during the year 2013 is sustainability. Too often in development the word sustainability is meant only to refer to financial sustainability.  But one of the major challenges development workers face in the field is organizational sustainability—how will the organization manage times of uncertainty and change; how will the vision and passion of the founder remain present in the team in such a profound way as to drive them without the physical presence of the founder? Since its inception Calcutta Kids has been focused on ensuring successful implementation of its programs in order to achieve its objectives. As significant changes in health indicators are now visible and attributable to our interventions, the obvious next step is to focus on the sustainability of the organizational systems and then scale up.

In the summer of 2012 following the unexpected death of our co-founding trustee in India, Mrs. Shwasti Chaudhuri, we inducted two dynamic new trustees to help guide the organization. I’m pleased to introduce Mr. Sudipta Sinha Roy and Mr. John Ambat. In the past several months, both of these trustees have spent a considerable amount of time at Calcutta Kids getting to know the staff and observing and participating in our activities. Aware of the organization’s desire to scale up, both John and Sudipta are carefully analyzing the existing systems and policies with regard to accounts, investments and human resources to ensure that we are ready.

Both Sudipta and John run their own companies and are able to provide 360 degree visions of how to run an organization in India. Given their rich professional experiences and backgrounds, they are able to guide Calcutta Kids to improve organizational sustainability.

A major challenge faced by organizations in the non-profit-sector in India is that of striking the right balance between policies guided by standards versus emotions. Individuals who choose to work in the non-profit-sector usually do so because of an emotional desire to serve the poor. A common purpose among a group of devoted employees often creates a feeling of family which certainly improves service delivery. But it also makes it difficult to standardize systems and ensure smooth functioning of the organization. In order to ensure healthy sustainability and growth, it is crucial for us to create an environment with a balance—one where we maintain an environment in which the staff feel like family, and is also able to function in a manner in which standardized policies and guidelines are followed. As we prepare to grow and move forward, we are confident in the guidance and support of the newest additions to our Board.

John and Sudipta have already proven to be wise additions to the governing body of Calcutta Kids. As do all of our trustees, they believe deeply in the work of Calcutta Kids and are committed to the organization’s sustainability and growth.–Noah Levinson and Evangeline Ambat