As one of 21 recipients of the 2009 South Asia Region Development Marketplace Awards to “Innovate for Nutrition” Calcutta Kids was invited to participate in a World Bank sponsored conference titled “Knowledge Sharing Forum on Infant and Young Child Nutrition” which took place in Kathmandu Nepal on June 12th and 13th. I went with our director, Noah to represent Calcutta Kids.

Along with representatives from the other 20 award winning organizations, the forum was attended by nearly two hundred representatives from governments, international NGO’s, and civil society organizations working to alleviate the horrific nutrition indicators which plague South Asia. The forum was also attended by journalists from throughout South Asia with the idea that in order for the public to care about nutrition, media information must be accurate and urgent. 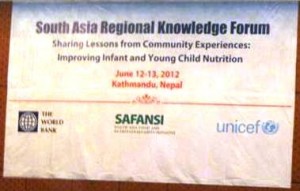 The conference was jointly organized by the World Bank, UNICEF, SAFANSI, and presentations were made by representatives from all those organizations as well as those from organizations such as FAO, CARE, DFID, and the Micronutrient Initiative. It was interesting and fun to meet some of the world famous nutritionists and development workers whose work we regularly use and are inspired by at Calcutta Kids.

While nothing particularly new to those of us committed to improving nutrition, some of the important and shocking truths which we were reminded about and which should be shared whenever possible were:

Noah and I found two of the presentations particularly exciting.

The first by Tina Sanghvi, the Bangladesh senior country director of Alive and Thrive said, “The crisis (of malnourishment) is here and the solution is in our hands”. She continued by saying that the knowledge gap is the main reason of high rates of malnutrition in South Asian countries. Another point she highlighted was that many mothers have no idea that a malnourished mother can also breast feed properly and that is a serious problem. Tina also shared some terrific TV commercials on health messages that Alive and Thrive has created and now show regularly on Bangladeshi television channels. Calcutta Kids was able to get copies of some of these high quality commercials and we plan on using them with our beneficiaries.

The second was by Leslie Elder, Senior Nutrition Speci alist at the World Bank who gave a fantastic presentation on responsible and effective ways to scale up programs. When Calcutta Kids is ready to scales up its programs, the framework that Leslie shared with us will certainly be an invaluable resource. Leslie’s presentation can be found here.

For those of you who might be interested, you can see all the presentations given at the forum by visiting here.

It was a fantastic experience to participate in the forum and to be surrounded by so many people who deeply care about the very same issues we care about at Calcutta Kids. -Sumana Ghosh

This entry was posted in Calcutta Kids Blog and tagged friends of CK, inspiration, malnutrition, partnership. Bookmark the permalink.