Milena Commits Another $50K to CK

Posted on August 8, 2012 by Calcutta Kids| Leave a comment

During my first summer in Kolkata in 2000 while working at Mother Teresa’s Home for the Dying Destitutes I met Milena Kotys, a social worker from New Jersey. Milena has remained a dear personal friend and is also a close friend to Calcutta Kids. In 2007, Milena’s father Wasyl passed away and a year later to honor her father, Milena started the Kotys Memorial Fund—a permanent endowment in the name of Calcutta Kids to fund our weekly health camp. In 2008, the weekly health camp cost around $5,000 per year to run. And safe investment returns in India are around 10% so Milena set a goal to raise $50,000.

Three years later, at a Kotys Memorial Fund fundraiser hosted by Ginny and Ravi Akhoury, I shared the following toast with Milena:

“Milena: Congratulations! You have done it. You’ve delivered on your promise to raise $50,000 for the Calcutta Kids endowment in honor of your dad. Fundraising is not easy and you should be incredibly proud. I feel so fortunate to have had you as a partner in raising funds for Calcutta Kids—and even though the goal has been met and your commitment has been fulfilled—I hope your assistance will continue. It’s been beautiful watching you through this process as every solicitation you send out; every phone call you make; every event you plan is done with such love, such intentionality; because you treat each of these acts as a tribute of love to your dad. I’m sure Wasyl is among us right now with a big smile on his face—the smile surely represents pride in what you have accomplished; and gratitude for the way you and your family have chosen to honor his life. On behalf of the many women and children in Fakir Bagan who receive free life-saving services because of your work.”

Between the establishment of the Fund and 2011, the weekly health camp turned into an outpatient daily clinic with a full time female doctor. The costs therefore increased, but the interest from the Kotys Memorial Fund has substantially helped in covering the operating expenses of the clinic.

Milena is currently in Kolkata for a few weeks and she’s been spending a lot of time at Calcutta Kids. Yesterday, she shared some observations with us about the clinic which I have paraphrased below: 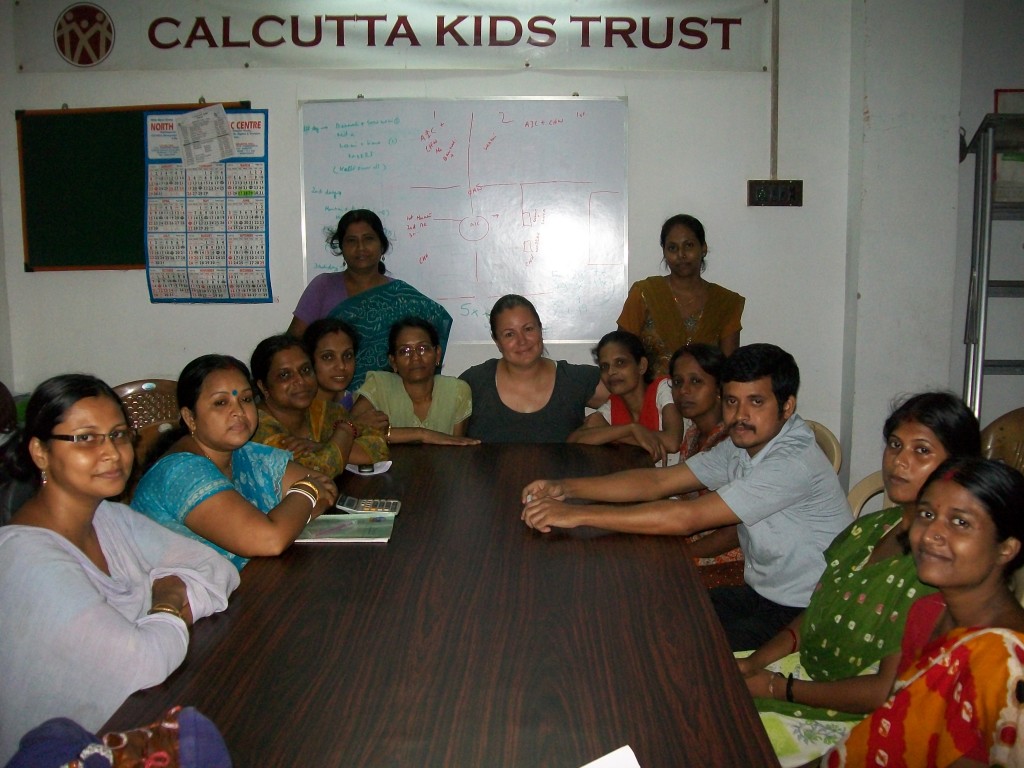 Milena Kotys with members of the Calcutta Kids team (August 2012).

“The weekly health camp has been turned into a high quality primary health clinic open five days a week. It makes me so happy that more patients can be seen more frequently. The weekly health camp was in a dingy room in the slum and now it’s in a clean, spacious, well-organized space with privacy for all patients; food and drinks are provided as well as all necessary medicines and yet there is still no charge to the patients and their families. There is even a security guard who keeps the clinic safe and welcomes the patients. Doctor Mukherjee is lovely and the staff is professional and kind. And the data system is just awesome. It’s wonderful to see the digital growth charts marking the progress of each child.”

Milena also sang the praises of the community health workers knowing that none of the work we do is possible without them.

All of us at Calcutta Kids are deeply moved by Milena’s generosity, and grateful for her commitment to the mothers and children we hold so dear. Thanks Milena. –Noah Levinson

This entry was posted in Calcutta Kids Blog and tagged friends of CK, healthcare delivery, partnership. Bookmark the permalink.