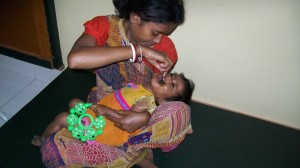 The most significant challenge has been the community’s acceptance of a paradigm shift in the treatment of diarrhea. In the population with which we work, Oral Rehydration Solution (ORS) has, for many years, been widely available and widely used. While ORS has the power to treat diarrhea, ORS is seldom taken in the prescribed fashion, but instead is taken randomly and sporadically. The mainstay diarrhea treatment among the general public in our coverage area remains IV fluids, and there is a perceived notion that antibiotics are the best method to reduce diarrheal episodes. (Even at the CKDTC under the treatment of a doctor, patients still often ask for IV fluids or antibiotics.) The paradigm shift being promoted by CKDTC is the systematic use of ORS and zinc according to the WHO protocol on the treatment of diarrhea. The Behavior Change Communication (BCC) component of the DTC program seeks to convey an understanding that ORS does work; that it can be used at home; that it is safer and reduces the risk of drug resistance; and that its cost is only a fraction of treatment costs for IV saline which is often prohibitively expensive.

Referral Systems
Another major challenge has been networking and setting up referral systems with government and private centers for cases which are too severe to be handled by the CKDTC. Because of issues relating to Government of India regulations on what can and what cannot be done in an outpatient facility, the CKDTC cannot handle cases which require IV fluids – and these in some cases are necessary. The CKDTC has, to date, been unsuccessful at coming up with an overall referral system which fully meets the needs of our patients. The problem may relate, in part, to the fact that the CKDTC is perceived by some medical facilities as taking away business of diarrhea patients who might otherwise have gone to them for expensive IV treatment.

Funding the CKDTC
Having made the decision not to charge for services (see more here), (Link to ‘Why don’t we charge for diarrhea treatments’ section) Calcutta Kids, of course, faces an important additional challenge – that of the long-term sustainability of the DTC. During this initial phase of clinic operation, we have been able to offset the costs of the DTC in two ways.

First, through a partnership with the Jolkona Foundation, we have received a $10 donation for each diarrhea treatment. The Jolkona Foundation works specifically with non-profits to help individual donors fund specific projects and receive, in return, a proof of impact. In our case, the proof of impact, is a copy of the discharge form (with identifying information omitted) that includes information on admission time, age of the patient, dehydration status at discharge, medications given and BCC topics covered.

The second way that we have offset the costs is to have additional Calcutta Kids activities take place in half of the space originally allocated to the DTC. We have found this particularly helpful as it permit the clinical staff to remain in one space rather than having to shift from one building to another for different activities. The spaces are separated and each has its own bathroom to prevent contamination between the diarrhea patients and maternal and child health patients. Having a dedicated space for the medical treatment of maternal and child health patients has been important not only financially, but also as a way of indicating our sincerity and commitment to quality ongoing care.

International Standards for Appearance and Cleanliness 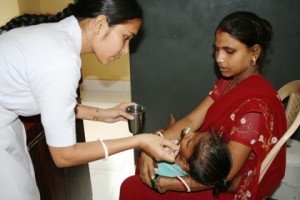 When Dr. Jon Rohde, an internationally recognized public health authority visited Calcutta Kids in January 2010, he suggested that one way to set the CKDTC apart from other clinics was to have international standards with regard to appearance and cleanliness. He suggested that the DTC have a pleasant atmosphere with plenty of light. And he suggested that although it might be more expensive, using tile for walls and flooring would set the CKDTC apart from other facilities. While following these suggestions did indeed involve additional expense, it has been clear from patient feedback that the money was well spent. Additionally, the light and tile make cleaning both simpler and more effective. The positive first impression is maintained throughout the visit, with specially trained cleaning staff, social health workers, nurses and doctors always wearing uniforms and presenting a professional manner and attitude, with international standards of care and cleanliness.

CKDTC Database
Calcutta Kids is a data driven organization, and a solid database has always been part of its plan for quality monitoring and evaluation. The database created for the DTC not only helps with the tracking of individual patient data and center level indicators and statistics, but actually helps with the clinical patient care. Click here (Link to a new page with the database tour) for a tour of the CKDTC database.

Seeing ORS in Action Wins Advocates
Before the staff of Calcutta Kids saw the dramatic effects that ORS had on patients treated systematically at the CKDTC, they had little more faith in ORS than the community with which we work. But when they saw with their own eyes that a lethargic sickly dehydrated child could be running around the clinic within just a few hours with nothing more than ORS provided properly by the caretaker of the child in collaboration with a DTC staff member, they began to believe. This conviction, in turn, makes their counseling messages about ORS, and their referrals to the DTC that much more effective. In the future, we hope to be able to capitalize on this ‘ORS transformation’ through a health promotion campaign.

Western Toilets are Not Well Understood
In an effort to have a center with international standards of appearance and cleanliness, two western toilets were installed. This is very confusing for patients and caretakers and as a consequence there were many children who simply urinated or defecated on the floor. Accordingly, we will soon install traditional Indian toilets at the CKDTC.

Not Charging for Diarrhea Treatments 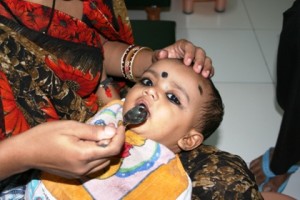 Our decision not to charge for treatment was taken for three primary reasons: First, one of the principal aims of the DTC is to facilitate a shift of knowledge, attitudes, and practices surrounding the treatment of diarrhea from heavy IV and antibiotic use to systematic oral rehydration therapy. Currently, clinical ORT is not a highly desirable course of treatment for many caretakers, who, as we have experienced over the last several months, frequently appeal for IV saline and antibiotics in lieu of ORS. This is true even despite a majority of mothers surveyed during the DTC baseline reporting ORS knowledge (66.1% knew to give ORS packets for diarrhea) and use (71% used an ORS packet for a recent episode of childhood diarrhea). Since diarrhea treatment at the DTC is linked to BCC counseling and follow-up household visits by trained staff, we believed that any factor contributing to smaller numbers of patients would fundamentally decrease our impact regarding diarrhea prevention. Additionally, we were concerned about excluding those with the lowest incomes and therefore, often, those with the greatest need.

Second, there has been a large amount of research published recently regarding service and user fees. J-PAL/MIT Poverty Action Lab has been a leader in using randomized control trials to look at development policy. Their recent work in this field has led to three main conclusions which were conveyed to Calcutta Kids in an email correspondence with members of the J-PAL team:

Lastly, after seeing the change in the community’s perception of Calcutta Kids following the introduction of our health insurance product – one which necessitated the collection of significant amounts of money, we were hesitant to charge for a service that was previously provided free through our weekly health camp, believing that it would likely alter our rapport with the community.

→ Forward to Innovations and the SARDM Grant