Innovations and the SARDM Grant

From Cholera Cots to Mother and Child Friendly Beds 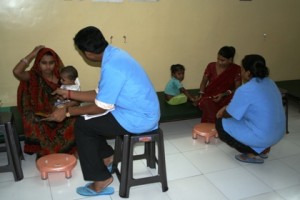 Initially, the CKDTC was equipped with 12 cholera cots based on the specifications from ICDDR,B’s Cholera Outbreak Training and Shigellosis (COTS) program. These beds, specifically designed for outbreaks of cholera, with holes allowing for the (mostly adult) patients to defecate without having to move to the bathroom, also provide an easy way of measuring liquid and solid output. However, in the setting of the CKDTC, these cots were problematic. Mothers did not feel comfortable sitting on beds that were constructed for comfort lying down, and small children were getting stuck in the holes. Most diarrheal infection in the community is caused by rotavirus rather than vibriocholerae and consequently contains less liquid than the classic rice water stools commonly associated with cholera. Therefore, much of the stool was getting stuck to the sides of the chutes rather than collecting in the buckets below. Although it did not occur, there was also the possibility that a child might fall off a cot and have a serious injury as the cots were 1.5 feet from the ground.

With the guidance of diarrhea expert Dr. Dilip Mahalanabis, mother and child friendly beds were designed and manufactured. These beds are only 6 inches off the ground, are padded and are covered with a waterproof material. Next to each bed is a low stool on which the doctors, nurses, and health workers sit when they are interacting with the patients and their caretakers. This allows for patients and staff to be on the same level while interacting. Additionally, each bed is mounted on the wall with hinges and can be folded up for the ease of cleaning.

From Bathroom Basins to Freestanding Handwashing Stations
Initially it was assumed that the two basins that are located in the CKDTC bathroom would be adequate for the handwashing needs of patients and caretakers. However, it was discovered that many mothers and children were missing handwashing occasions because of the distance to the bathroom. Therefore, a unique stand-alone handwashing station was designed and manufactured. This is a model that could conceivably be replicated in the home to allow for proper handwashing in a setting without piped water.

Wash Area
Many children were urinating or defecating outside of the bathroom area, often wetting or spoiling a set of clothes. While many mothers had brought a second set of clothing, the children were still quite dirty and many mothers were cleaning their children with the edges of a saree. To allow for the proper cleaning of children after these accidents, a special wash area was constructed in the bathroom where the mothers can spray water on the child after defecation – this low-lying area makes it easy for the mother to hold the child while at the same time spraying and cleaning the child. Mothers are also provided with a cloth to use for cleaning the child so that sarees are not soiled.

Privacy for Breastfeeding
We have established a breastfeeding area to offer privacy to mothers during breastfeeding. This area is also used by female staff of the DTC to counsel and care for young mothers experiencing lactation frustration or failure.

The initial funding for the establishment of the CKDTC came from an 18 month grant from the South Asia Regional Development Marketplace through the World Bank. The SARDM grant was for US$40,000 and also included technical expertise from the Micronutrient Initiative and two conferences on best practices. The grant period ended in May 2011, but was extended through August 2011 giving us six months of operations data to analyze for the final report.