Swarathma Brings in the Monsoon

I pegged Swarathma as a small time band from a mile away. It was presumptive, sure, naïve even, but it didn’t occur to me that anyone else would play for an NGO in the dusty heat of a slum for free. Little did I know how wrong I was.

When Noah divulged the details to me, I found out that the band is actually something of an Indian phenomenon. Their first album won them Best Band, Best Album, and Song of the Year at India’s most prestigious annual rock awards show. They were on the iconic TV series The Dewarists. They have toured Australia, Britian, and Morocco. And now they were playing for Calcutta Kids.

Back in the old days, for every paid gig they played one for free. They’ve since run out of enough time to keep up the one to one ratio, but when they can they still try to play for those who would not see them otherwise. Thanks to their bassist and spokesman Jishnu’s old friendship with Evangeline, the final concert on the tour to mark the launch of their second album would be in Fakir Bagan.

Weaving around piles of sand and through patches of the road lost in mud, Evangeline and I eventually led their van to Howrah and the impromptu stage that had been miraculously constructed for them. I think the band was almost so impressed as we were, and the juxtaposition of big-band electronics and crumbling-wall school grounds was immensely pleasing. 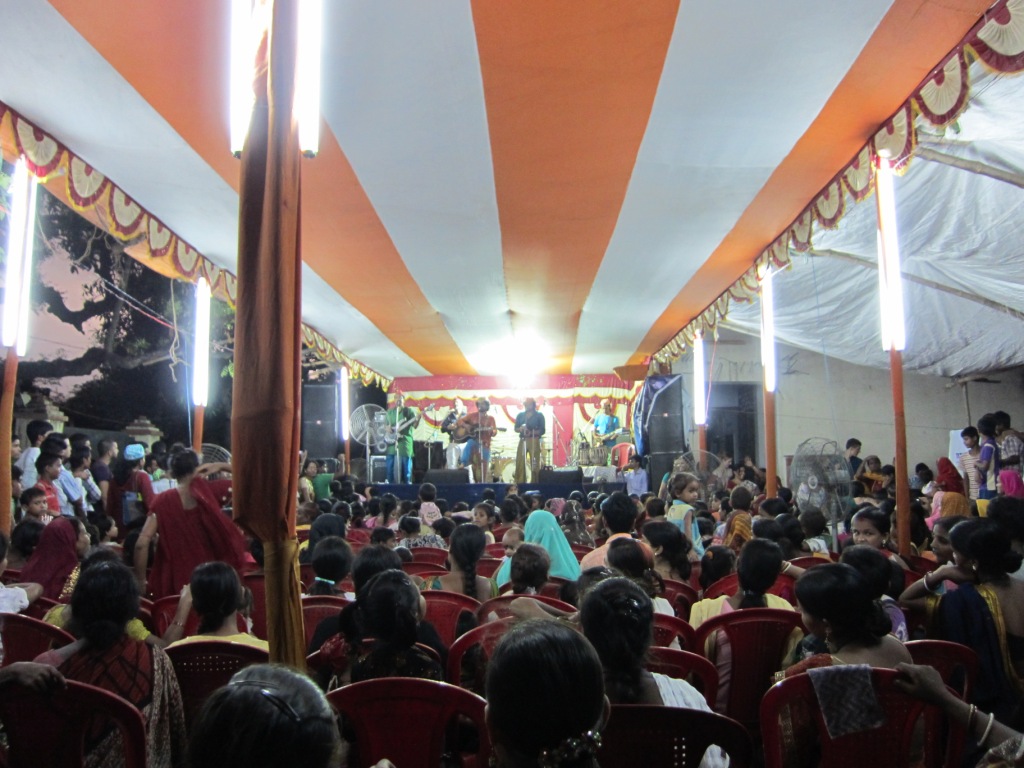 I picked out a spot in the sea of rickety plastic chairs that bulged at the edges of the colorful canopy above it, and the band sound checked as the crowd filtered in. Chandan and Kalyan lugged some wooden benches out from the school to augment the periphery as it became clear that spectators would outnumber chairs. When all was said and done, a floor of women and children—often balanced on laps or sitting together two to a chair—gazed up at the first bandstand of their lives.

Just before the band went backstage to change into performance attire, their lead singer arrived. No one was going to disappoint the crowd by admitting that he had been missing—the doctors had to knock him out cold at the hospital the night before to put a dislocated shoulder back in—and the band assured us that they could play without him. But after we left him at the hotel and told him to lie low, he just couldn’t. So with a piece of cloth to support his arm (to everyone’s amazement, he even replaced that with a guitar strap when the concert began, strumming away as though nothing had happened), he made it just in time. Security—a graying old man with a stoop and a hard stick—almost wouldn’t let him in. He didn’t have a ticket, after all.

When the band took the stage and plunged into their first song, it seemed to me that an almost tangible incredulousness emanated from the audience. The end of the first number and no more than a sparse acknowledgement of applause underlined the pristine newness of the occasion: the crowd did not know how to react simply because they had never reacted to such a thing before. 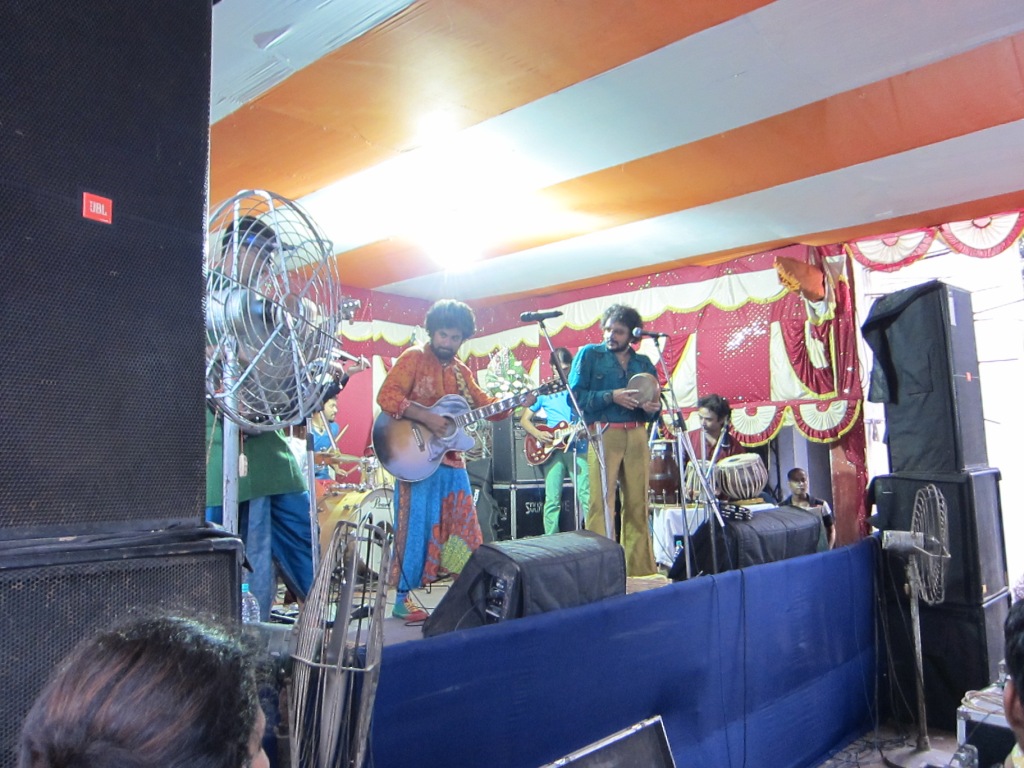 Slowly but surely, though, the audience grew less self-conscious and more absorbed by the music. Jishnu has a way of connecting with the floor before him, and in between songs he lightheartedly instructed the crowd in performance manners—when to clap, when to cheer—and introduced the songs that followed, explaining their significance and meaning. On the second song there was little cooperation when he tried to stimulate a clap, but when he motioned for the mothers to lift up their babies in front of them with the chorus of the fourth, there wasn’t a moment’s hesitation. He even seamlessly promoted Calcutta Kids’ new and critical mantra: “A child gaining weight cannot be very sick. A child not gaining weight cannot be very well.” 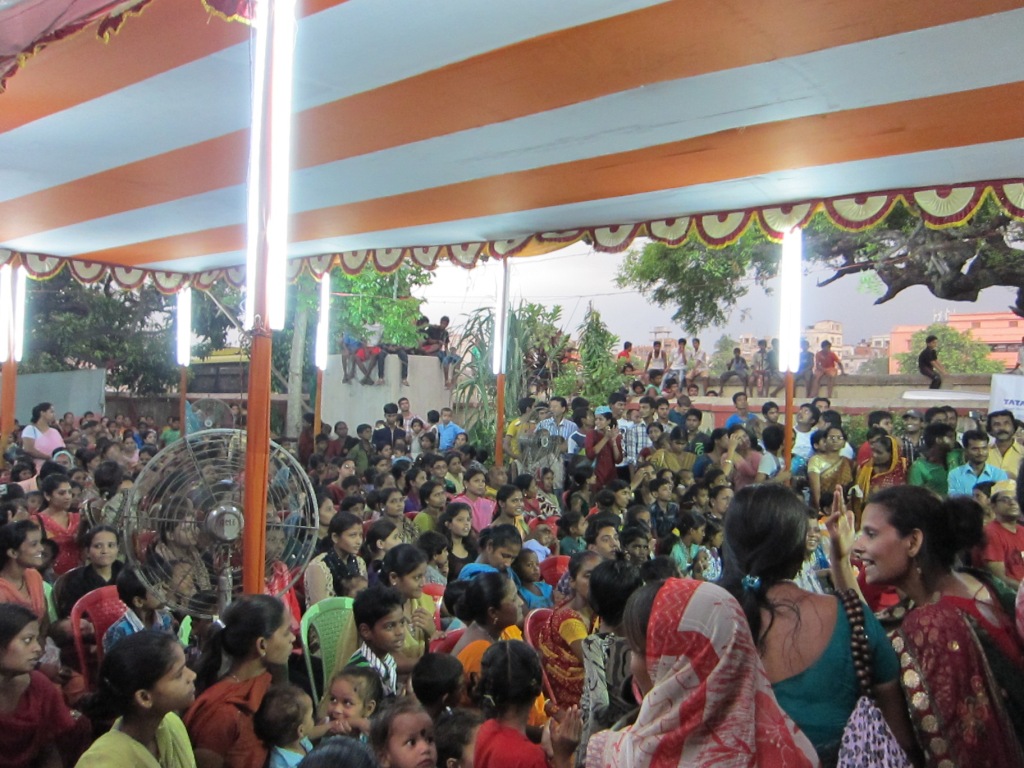 As the concert went on, the clouds around us darkened, rumbling closer. Just as the mood was reaching unabashed exuberance, the thunder clapped above us and the rain began to fall. At first, no one seemed to know what to do. As soon as it became clear that an inundation was in store, however, the crowd lurched into motion, fleeing either home or into the schoolhouse next door. The band and their helpers scurried to protect the equipment from the blowing rain.

Perhaps unexpectedly to the westerners among us, the deluge did not bring with it a downhearted regret that the concert had been called off before its due course. Instead, the cooling blessing of storm and rain stimulated the same energetic exuberance that had radiated up moments before at Swarathma. As we huddled inside to wait out the downpour, we figured that nature could have given us fifteen more minutes of music. But we agreed that no one could have planned so powerful a coda to the slum’s first concert.—Evan Mullen