Posted on April 9, 2012 by Calcutta Kids| Leave a comment 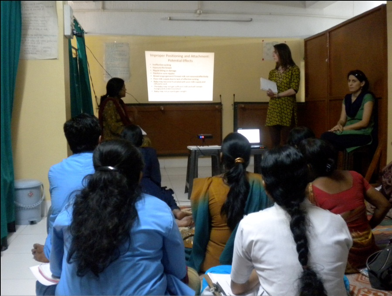 At Calcutta Kids we are currently revising our Child Health Initiative to strengthen and make improvements to our program activities. The revisions will be based on changes in international guidelines and lessons learned over the past six years. We recently carried out a similar process with the Maternal Health Initiative which included improved monitoring and evaluation, curriculum and protocol development, and in-depth trainings with our community health workers and other MYCHI (Maternal and Young Child Health Initiative) staff. Training and counseling will also be a major component of the child health redesign, particularly as we do not have a standardized training curriculum or comprehensive materials for child health counseling. Previous trainings have been informal and primarily verbal, using limited resources. 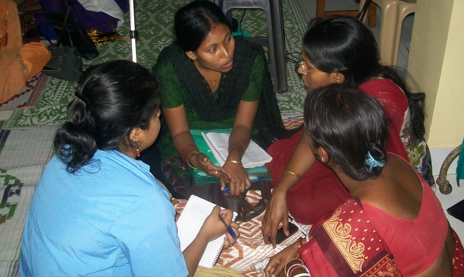 At present we have two interns from George Washington University (Lisa and Lindsay) who are working on behavior change communication (BCC) at Calcutta Kids. Under the guidance of the MYCHI program coordinator and manager (Sumana and Danya), they are developing a curriculum for child health education sessions, and creating flipcharts with child health messages to be used by our community health workers and health clinic staff. The education sessions were launched this month comprising of all the relevant child health-related topics that we address at Calcutta Kids. So far we have held education sessions for our health workers and health center staff on Initiation of Breastfeeding, Postnatal Care, Care of a Low Birth Weight Baby, and Complimentary Feeding. Next month, we will be holding sessions on Immunizations, Care of a Sick Child, and Development Milestones. 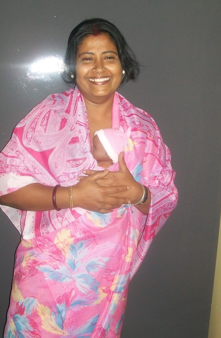 Although most of these sessions are review for our old health workers, this serves as a comprehensive refresher training for them, and is crucial knowledge for new health workers and the health clinic staff. Our sessions have been both educational and fun for the staff, not only comprising of lectures, but also demonstration, case study competitions, and role play. The child health education sessions will ensure that all our staff have the same foundation of knowledge, which will enable them to give uniform information and messages to the community we serve. Following these sessions, our staff will be equipped with culturally appropriate flip charts to be used in home visits and community meetings. -Danya Sarkar

Posted on December 9, 2011 by Calcutta Kids| Leave a comment 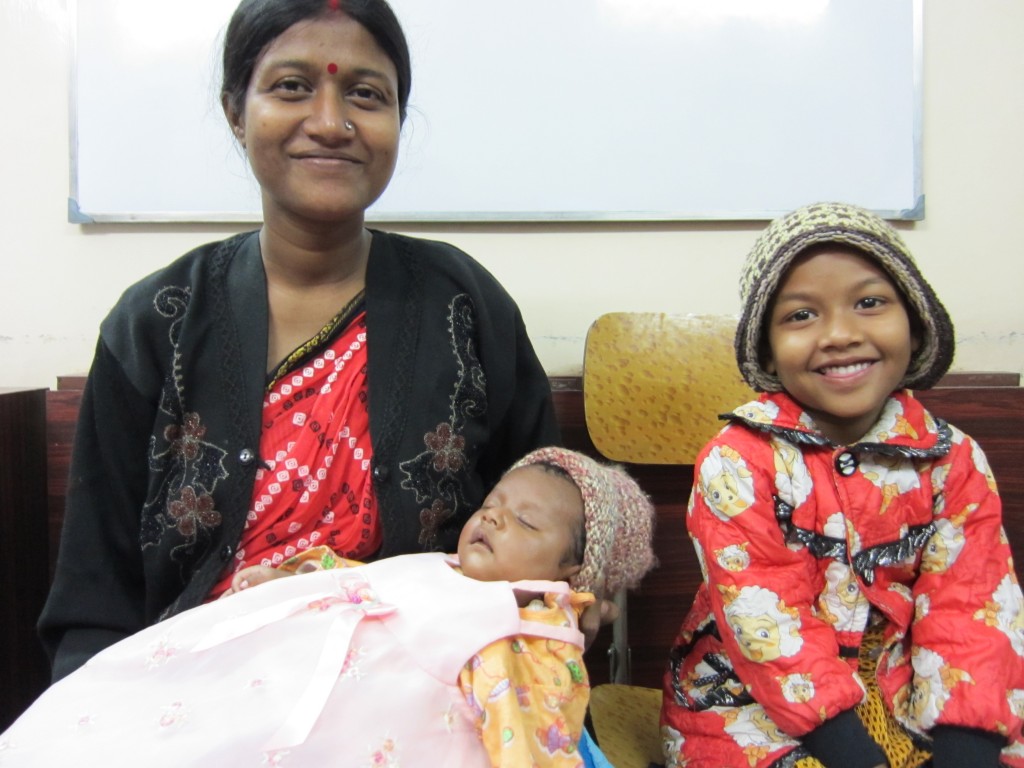 On October 28th, Sima Das, a community health worker here at Calcutta Kids gave birth to a beautiful baby girl, Sonali. Sonali could very well have been the 7 billionth baby born into this world, with the UN symbolically marking the milestone only three days later on October 31st. While population growth and the escalating urbanization of India are large issues, the biggest issue in Sima’s family and the people of Fakir Bagan who had seen Sima throughout her pregnancy was the gender of her baby.

As we were walking through Fakir Bagan two weeks ago, Sima’s first time back since Sonali’s arrival, (just to visit!) women in their doorways called out “Kya huan?” meaning, “What kind?” (boy or girl) and Sima would respond “Larkie” meaning “Girl”. As we progressed through the slum, the response became steadily softer and more timid.

Sima is a strong woman. She is confident in herself as a mother, as a facilitator for health and as a role model for the community. But with disapproval and doubt coming from all sides, Sima started to doubt her belief that her second female child was not a limitation or liability.

Back at the office, with the other community health workers gathered around, we talked about how Calcutta Kids is a well run organization with a workforce that is 90% female, how the Chief Minister of West Bengal is a woman, and how the Government of India is run by a woman (although not officially). However, even with these great examples of powerful and influential women, Sima was still frustrated and upset.

West Bengal is not known for female feticide, unlike states like Punjab and Harayana where there are only 750 girls for every 1,000 boys. Even if the girls are not missing, the female children are clearly not valued in the same way as their male counterparts. This preference for male children indirectly leads to many of the problems that Calcutta Kids works to solve. Like the high rate of low birth weight which is mostly caused by women not eating enough during pregnancy. Or the high rate of domestic violence that is tolerated because women do not have the power to stand up to their husbands.

The frustration and upset that Sima was feeling have already started to diminish and will surely disappear as her daughter thrives and grows to become a wonderful, smart and powerful woman. But seeing the pervasive and blatant contempt for the female gender was a reminder that we do not live in a bubble and that at the end of the day, each of our community health workers must go back to a world of gender inequality. At the same time, I am sure that the time each of these community health workers spends in a place where women are as powerful, or more powerful, than men, allows them to see the possibility of an India, or a West Bengal, or a Fakir Bagan where the first thing a woman is asked after giving birth is not the gender of the baby. -Dora Levinson