The Story of Puja Yadav

I will never forget the image of Puja on that first day of YCHING (Young Child Nutrition Group) in April 2011: Her mother Rinku set her down on the ground, and she took off, a whirlwind of 11 month old energy, tottering on slightly bowed legs, eyes bright with promise, grinning ear to ear. She was a radiant child. 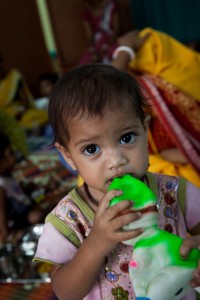 Fast forward to January 2012: Puja’s family came back to Fakir Bagan after a 10 month stay in the village during which time Rinku delivered her fourth child, Prince. Rinku had conceived again when Puja was just 9 months old, and the family–which included Rinku, her husband, Puja’s older brother and sister, and Puja–decided to return to the village for the pregnancy and delivery and to be close to extended family at home. The next time we saw Puja in January, we were shocked to see her condition–gone was the sunny, energetic girl we knew a year back. The new Puja was sullen, lethargic, and irritable. There was a clear reason: after taking her measurements we found that Puja had dropped off her growth curve, plummeting from -2.2 in weight for age z-score (WAZ) in April 2011 to -3.6 WAZ in January 2012. She was severely underweight and obviously suffering from infection. We counseled her mother and urged her to bring Puja in for examination and treatment, but with the new baby, plus Puja and her older siblings, Rinku was overwhelmed and decided to return to the village before we could intervene.

The family reappeared in Fakir Bagan in June 2012 and we were dismayed to see that Puja, now at 27 months, had taken a turn for the worse.  She was now -4.8 WAZ, very severely underweight, and also severely wasted at -3.03 weight for height z-score (WHZ). She suffered from both chronic and acute malnutrition- she was very weak, had raspy, labored breathing, a swollen abdomen, and chronic fever. She urgently needed help. We were sure she would not survive if she continued on this downward spiral. 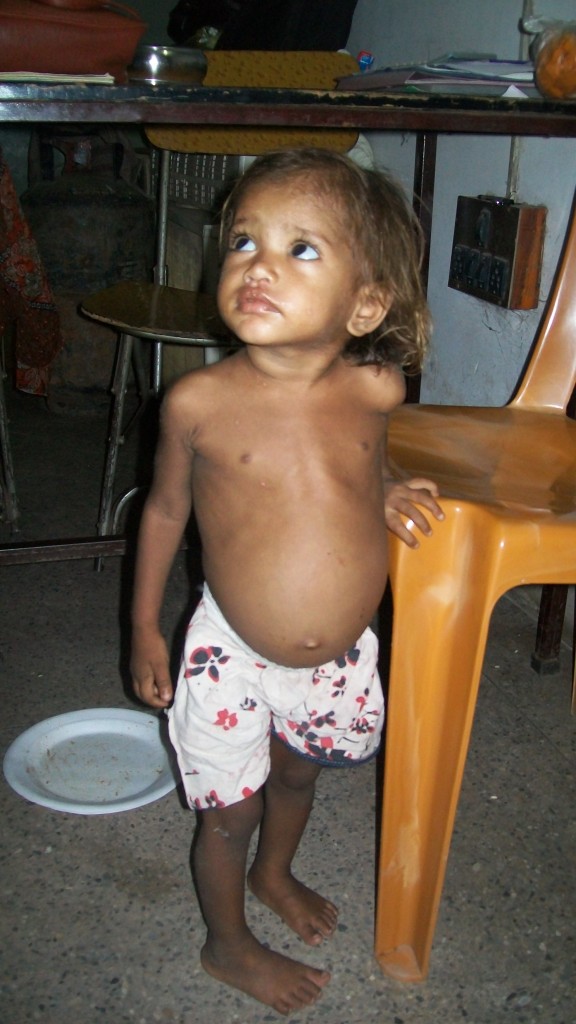 The Calcutta Kids doctor examined Puja and we quickly put together a treatment plan for Puja. First, we referred and accompanied her to Hope Hospital in Kolkata where she could be seen by a specialist pediatrician. The pediatrician diagnosed her with severe protein energy malnutrition (PEM), severe anemia, and chronic infection, and suspected that she had TB. He ordered a battery of tests and we sent Puja to the local DOTS (Directly Observed Therapy) center for TB screening. Though her Mantoux test was negative, her chest x-ray showed severe infection in the lung.

In consultation with the Hope pediatrician, Puja is now taking a 3 month course of level I anti-tuberculosis drug for her lung infection and therapeutic micronutrient supplements. Rinku brings her to the Calcutta Kids clinic everyday for an energy and protein dense, nutritious meal. Our health workers visit her home regularly for follow up and counseling on care, hygiene, and nutrition with the family. 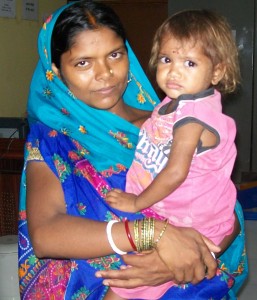 Puja Yadav, like all our children at Calcutta Kids, was never just a ‘case’ to be managed. She was a child at risk, a child trying desperately to survive the odds around her–a life that would not only be lost, but discounted, if someone did not intervene. Our entire team rallied together with Puja’s family.  We had intense discussions, we shed a few tears, and we cheered when Puja started gaining weight, slowly but surely; started smiling again; and even laughing. We are very happy to report that Puja has started to blossom again, and is slowly starting to resemble the girl we met over a year ago. In two months, she gained 1.5 kg, and shot up from -4.8 WAZ to -3.5 WAZ. She has improved from severe wasting (-3.03 WHZ) to mild wasting (-1.38 WHZ), a remarkable turnaround. And all of this has happened with home-based care, which is much harder to adhere to and manage than institutionalized rehabilitation, an option that the family would not consider, because it would mean leaving the other children at home without a full-time caregiver.

Like Puja, the family has started to change as well. Initially, both father and mother did not want to take Puja to the DOTS center three days a week for medication. They feared Puja would be labeled as a TB patient and ostracized by their neighbors. Calcutta Kids counseled them and gave them confidence to explain to their neighbors why they sought treatment for Puja. The community around them has also seen the changes in Puja and supports the family’s actions. Furthermore, as Puja’s health has improved, her younger brother Prince has also made remarkable strides. He, too, had been severely underweight when they came back from the village in June 2012. In the past 2 months, Prince moved up to the moderate category, gaining 1.2 kg, going from -3.47 to -2.4 in z-score (WAZ). We believe that this is another testament to change that has occurred in the family and especially in Rinku, who now seems less burdened, more confident, and proud of her children. When she brings Puja to the clinic she is delighted when Puja calls our health workers ‘amar didi’ (my elder sisters) and when Puja holds her hands to us in ‘namashkar.’ 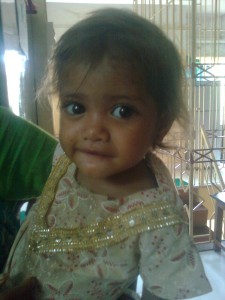 Puja is a true fighter. She is still the vibrant spirit who caught our attention long ago. She and her family just needed some extra attention. We at Calcutta Kids feel privileged that we were able to provide that additional help. We are committed to making sure that Puja remains on this trajectory of growth and nutrition, a critical foundation for a healthy and productive future. –Danya Sarkar

Puja’s Weight for Age Z score.
(Ideal is a straight line at 0)

Puja’s Weight for Height Z score.
(Ideal is a straight line at 0)

One Response to The Story of Puja Yadav