Posted on December 3, 2012 by Calcutta Kids| Leave a comment

On Wednesday 28th November, the United States Consul General Dean Thompson and his wife Jane paid a call on Calcutta Kids. They arrived at our office in full pomp and circumstance with an escort of 3 police jeeps. The Thompsons have been stationed in Kolkata since August 2011; have heard about the Calcutta Kids and its US connection; and have been anxious to see our growth monitoring and promotion (GMP) program in action. The visit was a great success and a major coup for Calcutta Kids. 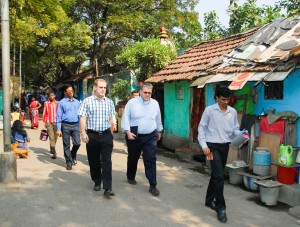 We began the visit by having tea around our lunch table while the senior management and CK Trustee, John Ambat, spoke with the Thompsons about the history; the objectives; the successes; and challenges of the organization. The Thompsons asked good questions and made several suggestions of potential collaborations we might pursue especially surrounding alternative mediums for behavioral change communication which they have seen work in various places, i.e. puppet shows and theater. 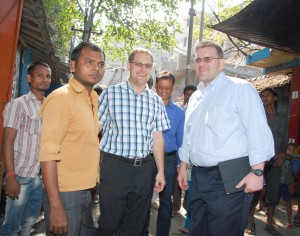 The next stop was Ma O Shishu Shiksha Kendra—our community center in the heart of Fakir Bagan. Wednesday was the second day of GMP—indeed the busiest of the three day program which takes place each month in which more than 550 children are weighed and measured. When the Thompsons entered the 1200 square foot center there were no less than 90 mothers and children. Mr. and Mrs. Thompson observed the weighing of the children and spent time with families waiting in line. 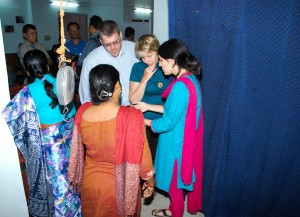 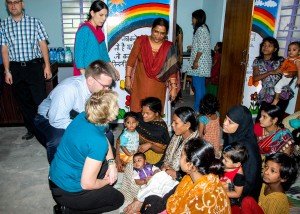 The Thompsons meet with beneficiaries waiting to be weighed and measured

We then organized a series of conversations so that our guests could interact personally with two of our health workers, Munni and Sima, and a few mother/child pairs. It was during these conversations that the Thompsons were really able to understand the power of the work Calcutta Kids does from the people who do it and from the people who benefit from it. After this series of conversations, Dean spoke to our health workers, about the importance of their work–that it is one thing to gain the knowledge, but the most impressive and most important thing is the transferring of that knowledge to lift up the other women in this community. Jane then mentioned that it was very evident from the way Munni and Sima spoke, how passionate and committed they were to their job—that it was good to see such empowered women in the community. 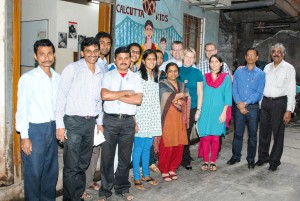 We are most grateful to Dean and Jane Thompson for their visit and we hope to welcome them back to Calcutta Kids again sometime soon. We are also most grateful to Danya Sarkar who encouraged and organized the visit. –Noah Levinson